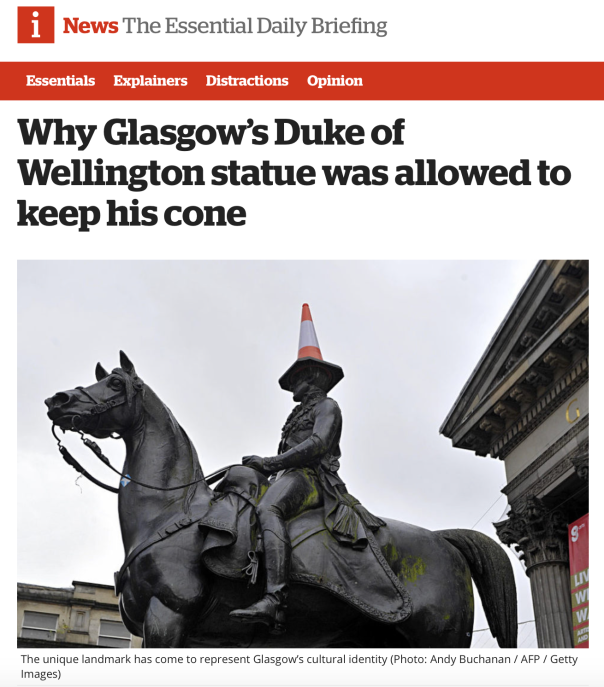 IN THIS COMPENDIUM OF PUBLIC ART WORKS, THE BEST EXAMPLES ARE NEVER FICTIONAL:

BY GILLIAN MCDONALD: “Edinburgh has the Castle. London has Big Ben. And Glasgow? Well, Glasgow has a statue with a traffic cone on its head. There are few more iconic images of Glasgow than that of the Duke of Wellington on horseback, with a bright orange cone perched neatly on his head. In 2011 the ‘Coneheid’ statue was named by Lonely Planet as one of the top ten most bizarre monuments on Earth, but why is it such an important symbol of Glasgow and its people?
A brief history of a strange statue Arthur Wellesley, 1st Duke of Wellington was best known for defeating Napoleon at the Battle of Waterloo (as well as giving his name to the wellington boot) and statues honouring this military hero can be found all across Britain. The Glasgow version was designed by Italian sculptor Carlo Marochetti and was erected in 1844. For the best part of 140 years, the statue stood on Royal Exchange Square without much fanfare. That all changed in the early 1980s, when a traffic cone mysteriously started appearing on top of the Duke of Wellington’s head. The origins of this practice are murky, but the most widely held belief is that a brave, drunk student scaled the statue after a night out in order to adorn the Duke with his new accessory. Despite attempts at removal by Glasgow City Council, the cone has remained for over 30 years. Whenever a cone is removed, it is only a matter of days before a new one appears in its place. 2011: ‘Save the cone!’ protests