or if a tree falls in the forest, and there is nobody around to hear, does it make a sound? 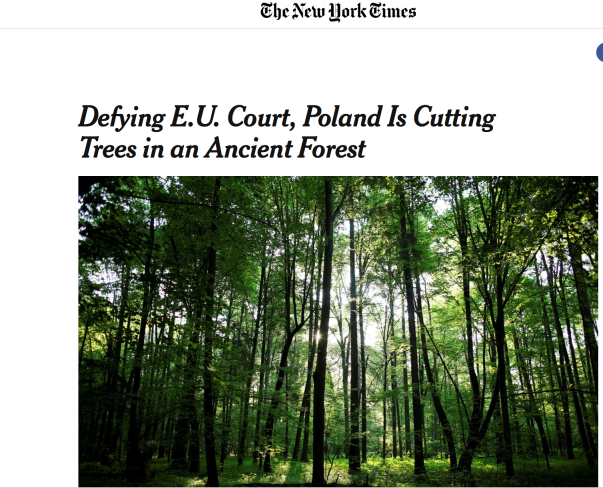 WARSAW — Defying an order from the European Union’s highest court, the Polish government said on Monday that it would continue logging in Bialowieza Forest, the last primeval forest in Europe and a habitat for hundreds of bison.

The decision is the latest challenge by Poland to the legal authority of the European Union, which Poland joined in 2004, and could result in financial penalties. The arch-conservative and nationalist government that took power in Poland in 2015 has been chastised by the authorities in Brussels; last week, it was formally warned that its efforts to consolidate power over the judiciary in Poland threatened the rule of law.

The Bialowieza Forest, a Unesco World Heritage site, is a relic of ancient woodlands in the middle of the European lowlands, at the border of Polandand Belarus.

It has been at the center of a heated debate since Poland’s government tripled the logging limits last year and, in February, repealed protections for areas that include a large number of trees that are more than a century old.

After months of debate between Warsaw and Brussels, the European Commission sued Poland before the top court of the European Union. In a preliminary decision on Friday, the European Court of Justice ordered that all logging in the forest, which is home to protected habitats and species, be immediately suspended.

On Monday, Poland’s environment minister, Jan Szyszko, who had called the logging a “protective” effort to combat a bark-beetle infestation, said that he ordered an end to the cutting in a third of the forest, but that the logging would continue in the remainder.

By doing so, Mr. Szyszko said, the authorities were conducting “an experiment.” After several years, the ministry will compare the condition of both parts of the forest to determine “who is in the right” — Polish officials and foresters, or the European Commission and dozens of scientists and environmental advocates, who have vehemently opposed the logging, saying it will damage the forest irreparably.

“We thank the commission very much for such a big interest in our forest,” Mr. Szyszko said with a hint of sarcasm. “But we will not be insulted by those who don’t know about the rules of protection of environment.”

“I’m speechless,” said Przemyslaw Chylarecki, a zoologist at the Museum and Institute of Zoology at the Polish Academy of Sciences. “The court has been crystal clear about the unconditional ban on the large-scale logging and the minister is resorting to these embarrassing gimmicks.”

Mr. Chylarecki said that the ministry’s experiment was pointless.

“It will be years, possibly decades, before we will be able to compare the results of both approaches,” he said. “Meanwhile, we have three harvesters working in the forest along with a team of loggers, which means that up to 1,000 trees are cut every day.”